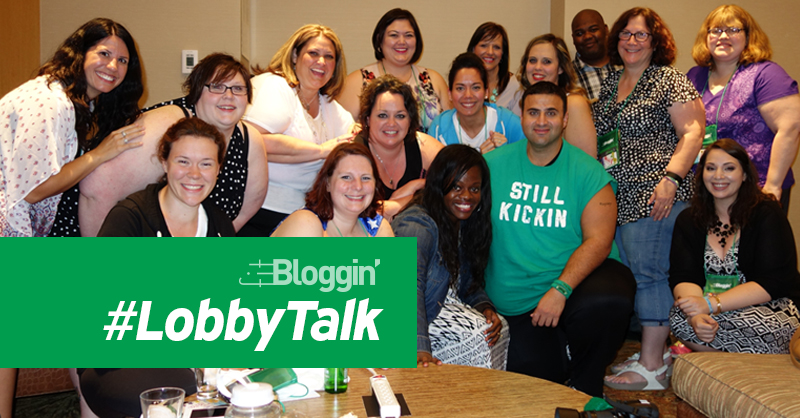 I’ve found that the moments spent in small groups sharing stories are the moments that I treasure the most at FitBloggin’. As a healthy living blogger down 70 pounds since 2010, I still have many wellness-related goals that I’m working on and I gravitate toward anyone who is working to achieve a tremendous goal of their own. Goal-diggers like that are magnetic, and our conference is full of them.

After one of the evening events in Denver, I felt like I needed more time. I wanted to hear more about what was driving this amazing group of people. I posted to the FitBloggin’ Facebook page asking anyone who wanted to talk about goals to join me in the lobby for an impromptu LobbyTalk. Thinking that I might have one or two others join, as I was competing with happy hour, I was floored to be quickly surrounded by 15 other people who wanted to talk and share stories of their journeys.

As a makeshift facilitator to the session, I was honored to lead the discussion that night. My fellow Fitbloggers spoke of their goals, their dreams, and what was going on in their world, and then ultimately we went around the room to allow everyone the opportunity to set a goal that they wanted to achieve by the next FitBloggin’. While there were tears from some and celebrations for others, we walked out of that room a stronger, more determined bunch ready to take on the next 365 days.

As I begin to plan for FitBloggin’ 2016, I suspect that we’ll have another LobbyTalk session. It likely won’t be on the schedule… but watch for it as we’ll announce it via social media once again. I’ll also share that it doesn’t take a session to learn about someone’s passion. It just takes asking a question and having the willingness to listen. Amongst this beautiful community of people, I encourage you to connect on this level with as many as you can. You’ll be forever changed as a result.

Kelly Guy is the author of the weight loss / healthy living blog No Thanks to Cake. Living in Denver, Colorado, Kelly shares stories of her new adventures in healthy living and tasty recipes weekly on her site. Follow her: Instagram | Facebook | Twitter | Pinterest