Discussion – Dealing With Your Before When You Reach Your After 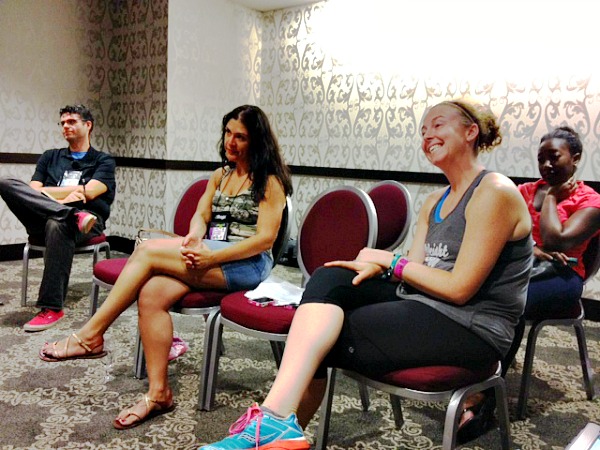 FitBloggin13 participants used this discussion as a forum for sharing emotional trials and triumphs associated with the life changes that occur as a result of losing weight.

Kelly Espita: I Lost about 124 lbs. *applause* Tara, from last year’s conference, gave me the okay to speak up and talk about what I was feeling. She was trying to push me out of my shell. So I’m here to talk about losing my emotional weight.

I went through a lot of physical and emotional changes. I was dropping weight like nobody’s business and this never happened to me before. When I was no longer invisible, I kind of wanted to be invisible. That’s where Dani came in. She understood and had written about it on her blog.

K Espita: I lost my weight with Weight Watchers too! *applause*

D Holmes-Kirk: So, I didn’t really have tough times growing up. I just never liked myself and I was never happy. I was one of those people who thought ‘If I just lose the weight, everything’s gonna be awesome’. And then I realized that just wasn’t the case.

K Espita: Right. Everybody has different stuff that goes on in their lives. Could be an accident or death in the family or some form of abuse. For me, I was youngest of 3 siblings and my immigrant parents really relied on me. I was the translator and I was responsible for a lot. I love my parents to death and I’ll never blame them for the crap food I ate. But it was a LOT of ‘stuff’. Now I’m having to take care of them, because they’re sick. And It’s just me helping them. I just recently moved out on my own and it was hard. I’m trying to find myself. When the protective layer of fat is gone, that’s when the real stuff starts. And it’s hard.

Question: What got you to the point where you realized you HAD to make a change? What happened to get you to the ‘before’?

Lisa (sheslosingit.net): I lost weight because of a midlife crisis. I was 38 with 2 kids and nothing I was doing was working. My husband said “I’ll always love you but I’m just not attracted to you right now”. So I thought “If I lose the weight, our marriage will get better.”

So I found a trainer at a local gym who was going to do a bodybuilding competition and I signed up! Within 5 months I lost 50 lbs and stepped on stage. Now I’m a trainer and I’m on a women’s bodybuilding team. *applause*

But during the process, I lost the weight and my hubby and I were still fighting. So, I learned that it wasn’t the weight. The weight was an excuse. By losing the weight I gained the confidence to fight back.

What was really awesome was getting my husband on board to do the same. I told him “I’ll always love you, but I’m just not attracted to you right now”. *laughs* *applause*

Question: I lost weight when I was widowed. How do you all deal with being ‘visible’ after weight loss? I’m 50 and I don’t like the attention/vulnerability. I didn’t experience it before.

K Espita: I don’t deal with it well and so I try not to deal with it. But I’m someone who is extremely self conscious.

K Espita: Sometimes I just wish I was invisible. Now that I’m visible I wish I could go back sometimes to not being noticed.

Kelly (NoThankstoCake.com): I think it’s comfort that we’re looking for. This isn’t my first time losing weight. This time around, I’m doing it differently. I’ve gotta figure out what made me 260 lbs. It comes down to the way I think about myself. I’m taking it slow this time.

K Espita: If you lose slowly, you have a better chance of maintaining.

Brooke (BrookeNotOnADiet.com): I lost 177lbs with weight watchers. When I was 327lbs I felt like I wasn’t good enough. And I still feel that right now. I don’t feel like I’m worthy of friendship.

FitBloggin Attendee: Let your freak flag fly! Be You. *laughs*

D Holmes-Kirk: It is hard. But you see people, even in this room, that get it.

Susan (Foodfoodbodybody.com): When you’ve been invisible for so long, you feel like ‘Hello, where were you?’ When people are nice to you after you have lost the weight, I get pissed off. You get upset on behalf of your ‘before’, your former self.

Andre (@Missionmeltdown): I feel like I come here and I’m such an extrovert. I’m outgoing and I’ll talk to anyone here. But at home I’m an introvert. I used to be a football player and right now I am my ‘before’.

I’m the face of my company so I’m a representative. At 390 lbs I was put on a billboard all over Delaware. Extremely uncomfortable situation.

Deb: Unlike a lot of you, I was the skinny kid. I was scrawny. I got that f%#$ing menopause and I gained 40lbs in 6 weeks. I went to the gym and lost weight. Then realized I’m waiting for my husband to die on the way home from work.

So I started to look a little better and get that attention from men. But I was still unhappy in my marriage and in myself. So I gained all my weight back.

Question: How do we get to feeling comfortable with people?

Fitbloggin Attendee (@Run_Ride_Repeat): When I was 260lbs I found my self acceptance and self love and self worth. It became really easy because I wanted to get better and improve my life.  I was open to love from other people. And NOW It’s easier to deal with. Because I started to deal with it early on. I never hid in the corner.

Mariana (@ProjectUnfluff): I’ve always relied on my humor and I’ve learned to anchor myself on the positive side of the friendships I have. My weight loss doesn’t change who I am. I act like nothing’s happening. There’s nothing about me that will change.

Martinus (@300lbsandrunning): For me, lots of things do change though. With my family, friends, holidays and stuff. I try to get others to understand my change.

Michelle (WorldAccordingToEggFace.com): I definitely changed. When I was heavier I was a people pleaser, the jolly fat girl in every way. Now I’m my best friend.

Michelle: Now that I’m my best friend, I attract quality people. I’m more authentic to me.

K Espita: My circle has definitely changed. I’ve lost friends … So, to Mariana, you will notice that as well.

Gwyn (@smileygwyn): My friend says I’m a fisher, I’m always fishing for compliments. I’m kind of narcissistic and constantly seeking validation. As I’ve lost weight I’m more confident. I embrace my ‘now’. I flirt and it’s just fun to embrace who I am.

Amy (Itisallabouthejourney.com): I used to be so dependent on my scale. I’ve put the scale away the last couple months. And now I’m working on changing my mental picture of who I am. I just want to ‘be’ and not have to constantly work so hard to be me.

Question: Does anyone feel like losing weight is just what they do? I’ve been on a diet my whole life.

Gwyn: I’m constantly upping my goals and it helps me a lot. The journey doesn’t end. I just want to keep moving forward and not backslide.

David (Keepitupdavid.wordpress.com): I started losing weight 3.5 yrs ago. I’m down 160 lbs. *applause* What helped me tremendously was to get rid of my expectations and that took away the pressure. I just decided to try and things started to work. I found my rhythm and the things that worked for me.

Then came the attention and the social situations and I just remembered I don’t need to put pressure on myself to make a certain impression. I just decide to show up. It’s worked really well because there’s no sense of failure when there’s no sense of expectation.

Kimberly (@manifesturself): I can relate to being really afraid. I was so afraid to come here. I’m forcing myself to do this. And I find it’s amazing to just come out and do little things. Even just saying “Hi!”

D Holmes-Kirk: Yes. And one of the hardest things is just deciding that we are worth all those things, that we’re worthy.

Attendee: I think it’s important to remember that you are worth it. I got to where I was because of a horrible marriage. Thank heavens I decided to break free. Not just that marraige but other relationships as well. I love myself and I have gotten rid of the poison and all the things that hold you back.

D Holmes-Kirk: Yes and it’s also hard when you’re your own poison.

Katie: I locked myself up a lot in grad school and just ate my way through things. I’ve lost 45-50 lbs. and I’m still very socially awkward. I’m very introverted and I haven’t been on a date in a year. People ask my why and I always feel not good enough. There’s also a lack of support and that just kills me. I always say that I have just one friend. But I’m here at FitBloggin and I’m not alone and I’ve had the best time of my life.

Erin: I have a similar story. I have one friend and my husband and that’s all. I don’t know how to make friends. It’s hard to be alone.

Martinus: Well, something my grandma used to tell me is that you only have two friends in life, maybe three: Yourself, God and sometimes your Mother! *laughs*

D Holmes-Kirk: Thanks so much for coming and for sharing your stories.

This session was covered by Pilar Harris, a Southern California based healthy lifestyle advocate and newbie vegetarian. I blog at http://www.pilarinmotion.com, about healthy living, books, local travel and food.