Zumba was held from 9:30-10:30 on the 6th floor of the Nines Hotel.
Sue, Mrs. Fatass, lead the Zumba class with the help of her business partner, Samantha from Simplifying Sammie, and her special guests. The special guests included Gina, Bonnie, and Nellie. 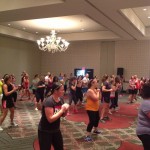 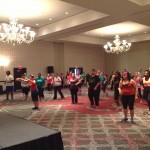 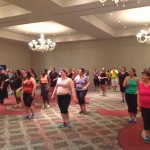 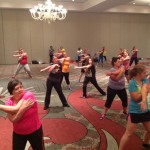 66 people attending (about 1/2 were new to zumba or only do zumba occasionally). There were a wide variety of people and fitness levels.
Sue introduced herself and her business partner Samantha to start off the session. Sue encouraged participants to do their best and if a move didn’t work for them to just do a move that will work for them. After a reminder that Zumba is good for cardiovascular and the soul she was off with her dancing.
At the start of the first song started Sue exclaimed, “I can shake my hips like an angry Latina”
In total there were 9 songs. The ladies took turns leading the songs. There were no breaks and the music varied between fast and not-so-fast to give people a time to recoup between songs.
Before the cool down, the room was split down the middle and people took turns showing off their zumba dance skills. Someone even did a cart wheel down the middle.
Sue and Samantha led the cool down that included light stretching and some side to side motions.
The session was captured by Kari of My Weighting Place where she is trying to figure out how to live in a post weight loss world where the scale is no longer her final destination.