Please ignore the last version of this post, the LiveBlogger hit Publish instead of Save Draft.

My sincerest apologies to the facilitators, attendees and interested parties!

Live Blogger Session Summary: Diet Is A 4 Letter Word – What Are Your Food Rules?

This session allowed attendees to discuss their definition of the word diet and how thoughts, feelings affect our food intake patterns.

Our session leaders gave us some insight about why this topic was important to them:

After the above attendees introduced themselves and their reasons to why they chose a session about diet and food rules, it was noted that the theme of restriction was associated with the word diet in nearly every background story.  Restriction as a theme was acknowledged but instead the positive rules about how to many people work to overcome their restrictive tendencies were highlighted:

A topic that resonated with many attendees included stress eating.  Depression or bad days leading to the subsequent need for a specific quality (salty, sweet or “bad/unhealthy”) or quantity (usually a lot!) of food to soothe was a need shared by most in the room.

Helpful tactics to deal with the negative feelings preceding, during and after the “unstoppable downward spiral” included:

The topic that received the most discussion was unsolicited feedback from friends, family, coworkers and even strangers about food intake.

The dilemma of shunning oneself from social situations to avoid conflict or “being on your best (eating) behavior” with others was discussed. Some of the tactics suggested to deal with uncomfortable confrontations were:

We wrapped the session with the thought that as bloggers we have the potential to educate others about our personal journeys with food, health and wellness.  Sharing what we learn about ourselves and each other on our blogs may have a farther reach than just our readers. 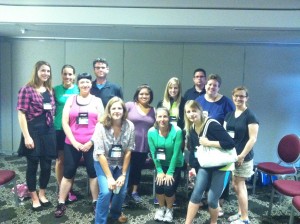 The FitBloggin’ 13 Attendees for Diet Is A 4 Letter Word (Missing: Sarah)

This session was captured by Melissa Burton of thevalentineRD.com – Dietitian born to love food, fitness, family and Duran Duran.