Kara Richardson Whitely was never one to attract attention. In fact, when her weight topped 360 pounds, she hid from the world. Like many people who struggle with their weight, she struggled between intention and action. She had a secret longing to be a hiker girl; the trouble was, she would pine over adventure travel magazines while eating a king-size Kit Kat bar. 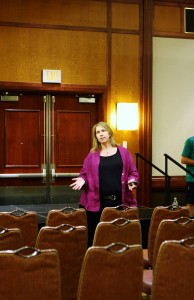 Kara started off on her weight loss journey with a failed hike to Camel’s Hump, which is the third highest mountain located in the state of Vermont. At the age of 21, Kara’s weight of 300 pounds was the only thing preventing her from making it to the top of the mountain. She used food to shield herself against personal and family issues from her childhood. At the age of 30, Kara finally decided that, unless she went back to hike Camel’s Hump, she would never be able to live the healthy life that she dreamed of. Unable to reach her goal, Kara began to set up a course of action that would enable her to accomplish her dream of climbing mountains. 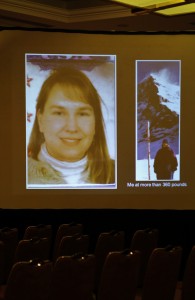 Finally, ten years after her initial attempt, she reached the summit of Camel’s Hump. Eventually, Kara hiked to the top of Africa’s highest peak, Mount Kilimanjaro. In addition to these accomplishments, Kara documented her weight loss of 120lbs on her blog.  She also used her blog as a platform to raise money for Global Alliance for Africa’s AIDS orphans. She documented her journey on FatWomanontheMountain.com as a way of sharing inspiration and raising money for charity organizations.  When Kara regained some weight after the birth of her first child, she used the motivation of working for a cause to aid her with her weight loss goals. Once again Kara was able to use her website to develop credibility and raise awareness for a cause that was so much bigger than herself.

How to Reach Out From Your Keyboard and Connect? 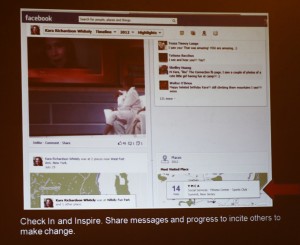 Kara plans to partner with Bistro MD to lose weight in a real way and hopes to climb Machu Picchu.

This session captured by Sana.