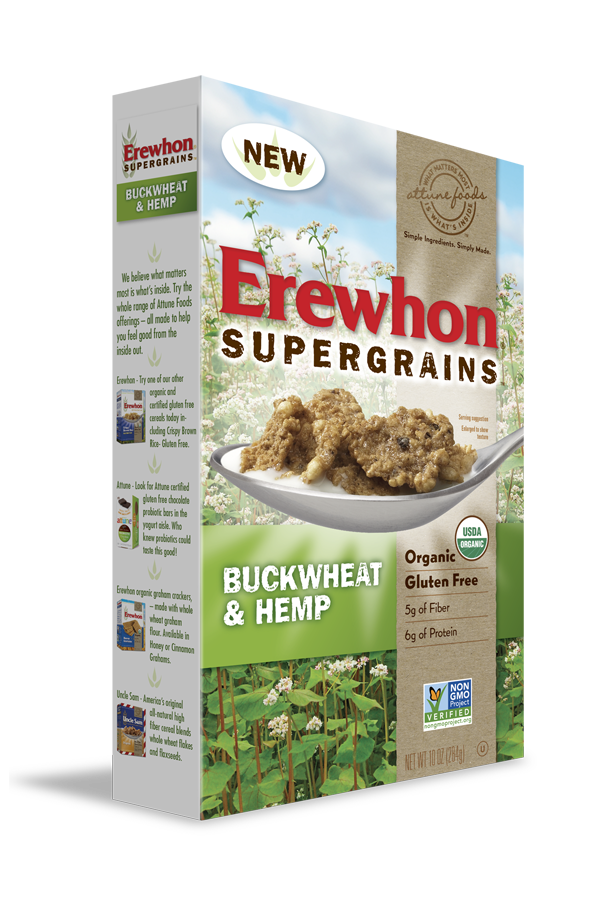 The cereal aisle is one crowded spot in the grocery store. With all the options on the
shelf, it’s sometimes hard to know what to buy and how to make a good choice, isn’t it?

More Fiber!
Improved Flavor!
Whole Grain!… or is it?

With so many messages vying for your attention from the front of the cereal box, let’s add one more to the mix: Supergrains. Okay, technically buckwheat and hemp are not supergrains individually, but together they do make a powerful team.

Imagine this, a naturally gluten free cereal (yes, buckwheat is naturally gluten free) that has 5 grams of fiber and 6 grams of protein- it kind of makes you want to do a happy dance when you consider all of the other gluten free cereals available that have no fiber or fiber that’s been added in to boost the numbers. We call Buckwheat & Hemp our Supergrains cereal because all that fiber and protein goodness is naturally occurring and present in the ingredients themselves. Hempseeds do come from the cannabis plant, but does not impart any intoxicating properties; they are full of Omega 3’s, 6’s and 9’s. We tend to think good food is naturally nutritious and doesn’t need fortification. It’s a bit of a radical take on a cereal aisle where fortification is the name of the game. Instead, we take a simpler approach–

We steam whole organic buckwheat groats, organic brown rice kernels and organic hemp seeds until soft. Then we roll them flat. We drizzle a touch of organic brown rice syrup and organic maple syrup for a hint of sweetness and a dash of sea salt. The flakes are then toasted and voila, you have one Supergrain cereal. So whether you snack on it by the handful, pour yourself a bowl with a splash of milk or grind it up for a different take on a breadcrumb substitute, we think you’ll find this nutty cereal quite delectable. But don’t take our word for it, you’ll be getting a box to try at FitBloggin’! Let us know what you think and email annelies@attunefoods.com.

Erewhon Supergrains will be sold exclusively at Whole Foods Markets, starting in September 2012